Marathoning for the memorial 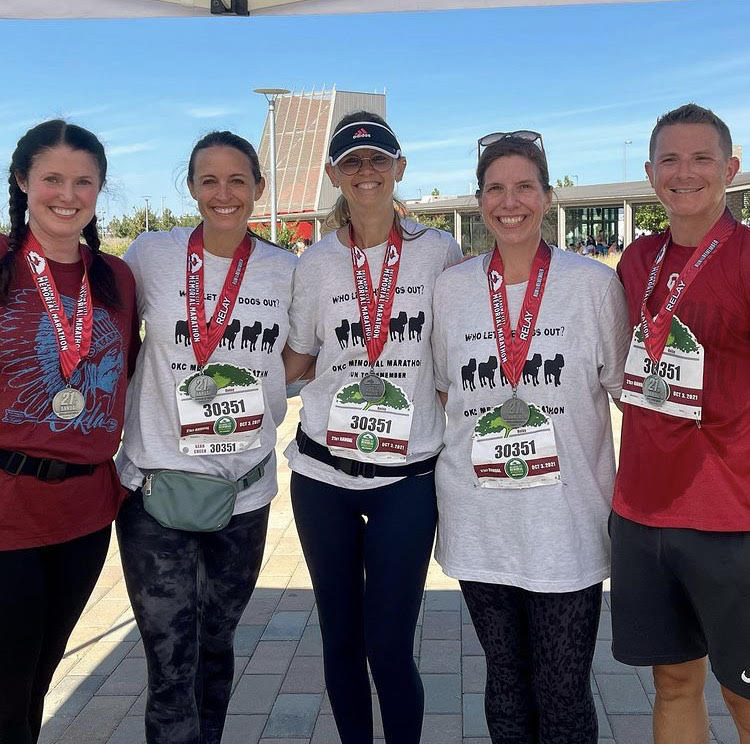 All the teachers that ran in the relay pose with their medals from the race.

Oklahoma held its annual Oklahoma City Memorial Marathon on Oct. 3. It was originally scheduled for April but was postponed due to COVID-19 risks. Many teachers at Edmond Memorial High School participated in all of the different distances at the marathon.

“Before school started, in the teachers’ group chat, Lindsay Warthon put out a message that said ‘Hey! Would anybody like to do a relay for the marathon?’ And the five of us were the ones that responded ‘Yeah, sure, why not,’” Nieves said.

They met to discuss the logistics of the race itself and plan training. In the relay there are two 5k’s, two 10k’s, and a 12k run, and they divided them up along the five relay participants. They also had a clever team name, “Who Let the Dogs Out.”

“We created a private group chat to motivate each other, and we would post our training runs,” Nieves said. “We supported each other and cheered each other on as we trained.”

Along with the relay some teachers chose to run in other legs of the marathon, with Emily Busey running the full marathon, and Tyler Sergent running the half. Sergent ran with some of his friends, which motivated him to train harder.

“[The people I ran with] are some of my closest friends, so it made it so much more enjoyable than if I did it on my own,” Sergent said.

Each teacher had their own individual reasons for participating in the marathon. Sergent wanted to know he could make it through.

“I don’t know if there was a person inspiring me but more of an idea,” Sergent said. “It is something I had never done before and wasn’t even sure if I was going to be able to do it. It was about me proving to myself I could do it and finish.”

Nieves has no plans to stop running anytime soon. After overcoming health problems from her past, this race was just the beginning for her, and she loves the feeling that came from it.

“It was kind of like my comeback, so I plan on doing more races,” Nieves said. “It was really self-fulfilling for me and did a lot for my psyche and my mental health that I can do that because I went my fastest mile pace I’ve ever gone in my life.”

The teachers from Memorial that participated in the relay have also decided to participate in the memorial marathon in April 2022, because this race has inspired them to work hard.