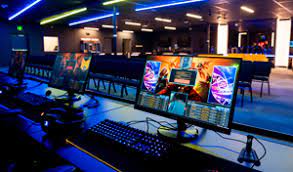 The CO-OP Esports Arena at The University of Central Oklahoma, where the Memorial Esports team practices.

Although they are a newer program to Edmond Memorial High School, the Memorial Esports team is one of the most competitive Esports teams in the state.The team is led by head coach Kate Swearingen, a long time gamer. The team works hard everyday to be a championship winning program and create an environment based on teamwork, commitment and competitive spirit.

Swearingen has grown up involved in gaming and shares this love with her players. Through this  mpassion they have been able to build the foundation of their successful program.

“I’ve been gaming since I was a little kid. I used to often play with my older brother because he said it was harder than going against the computer,” Swearingen said.

The Esports team is committed to building a strong relationship with one another and maintaining a competitive spirit to improve.

“I would tell anyone who loves playing with a group, they like being competitive, they want to improve at something, and they like teamwork, they would really enjoy esports,” Swearingen said.

However, the Esports team isn’t all hard work and no fun. There is lots of comradery amongst the team which makes it especially enjoyable for the players, including Estelle Olivero.

“We sometimes make brownies for each other, and we have a Discord where we can chat, send memes, and discuss things that happen at school together,” Olivero said.

With the combination of dedicated training and fun filled relationships the players have been able to receive some prestigious honors. Joshua Swisher even received a $10,000 Esports scholarship for his performances at competitions.

“At first my parents weren’t fully on board with the idea of me putting so much time into Esports, but once I started receiving full rides to college they seemed fine with it,” Swisher said..

The Edmond Memorial Esports team is clearly on the right track and will continue to dominate with the help of Swearingen, their friendship, and their love for gaming.