Starting Swine Week off with a bang 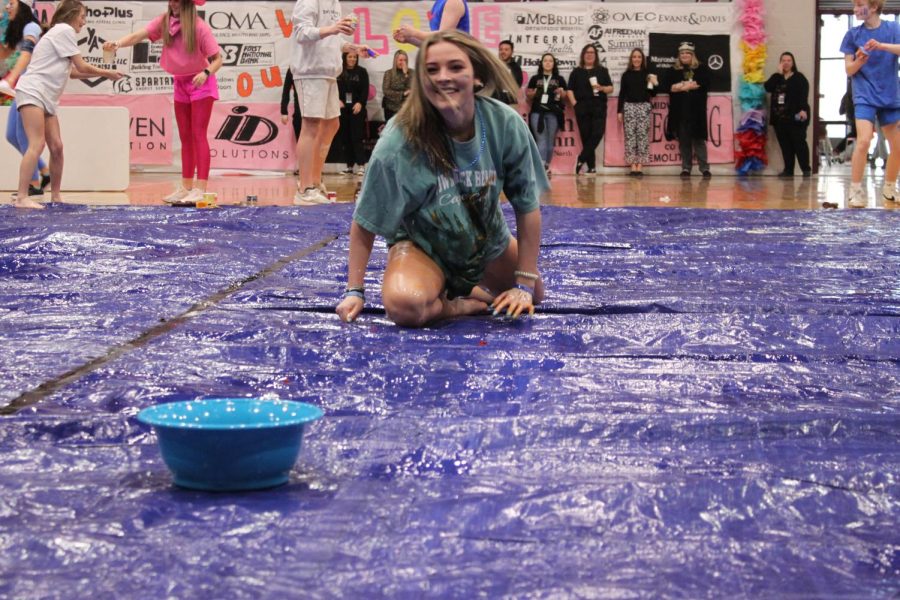 Students slip and slide on cooking oil to make an ice cream sundae and earn points.

Edmond Memorial High School’s Swine Week kicked off on Monday, March 7 with a class competition. Hosted by Allison Wright and Brock Coleman, students in different grades competed in games for points to declare a winner at the end.

The first assembly began with a performance of the National Anthem by one of Memorial’s concert bands. Before the games started, the CEO and founder of 2022’s Swine Week recipient, Stacy McNeiland, stood up to speak for the audience about the Care Center.

“Other schools don’t get a recipient that is so involved with the actual philanthropy week,” Wright said. “They’re coming out to every assembly; they’re speaking; they’ve been with us every step of the way with all of our Swine Week stuff.”

The assembly then transitioned into a game of musical chairs, with a bit of trouble at the start of the game.

With seniors in the lead, the assembly moved swiftly into a strange game consisting of two students from each grade (a boy and a girl) and a flat gym scooter for each grade’s team. One person from the team laid on the scooter while the other student pushed the one laying across the gym by their feet. The aim of the game was for the person laying down to lick the length of the gym floor, and then switch. The seniors won.

After a traditional game of table surfing (upperclassmen against underclassmen) the assembly transitioned into a slip and slide. Again, two students from each grade were on a team, and they had to attempt to slide back and forth to make an ice cream sundae and eat it. The sophomores won.

The first assembly was filled with audience participation and chants, creating an incredibly fun atmosphere. Most freshmen and sophomores were never able to experience a real Swine Week because of COVID-19 and the energy this year was set in stone with this first assembly.

“Now that we’ve set the tone for everyone’s energy, people know what to expect, so they can just go in there and have fun. It’s only gonna go up from here,” Coleman said.