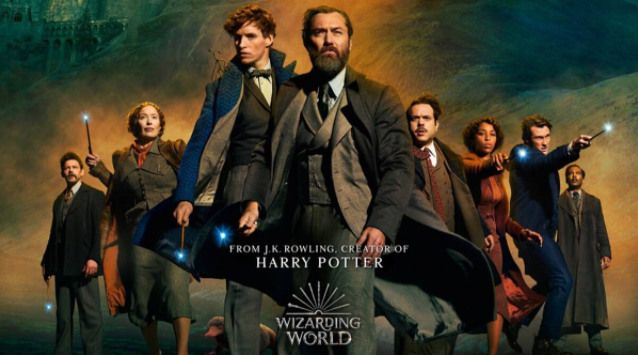 Fantastic Beasts could have done more.

Ever since readers first opened “Harry Potter and the Sorcerer’s Stone” in 1997, fans all over the world have fallen in love with the magical universe that author J.K. Rowling created. In recent years, Rowling has written and produced the Fantastic Beasts movie series, which explores the Wizarding World during the height of Gellert Grindelwald’s power. Grindelwald wanted to bring the wizarding world out of hiding and rule over the non-wizarding folk. The newest movie in this series is “Fantastic Beasts: The Secrets of Dumbledore” which was released on April 15 after its initial production was delayed due to COVID-19.

The movie picks up where the last film ended with Jacob Kowalski (Dan Fogler) dealing with the loss of Queenie Goldstein (Alison Sudol) to Grindelwald (Mads Mikkelsen). Albus Dumbledore (Jude Law) and Grindelwald cannot fight each other because of a pact they made as children, so each side is assembling a team to take down the other. Grindelwald brings together Goldstien, Credence (part of the Dumbledore family played by Ezra Miller) and a few others while Dumledore enlists the help of Kowalski, Newt Scamander (Eddie Redmayne), Theseus Scamander (Callu Turner), Eulalie Hicks (Jessica Williams), Bunty (Victoria Yeates) and Yusuf Kama (William Nadylam). After Grindelwald is excused for his crimes, Scamander and his friends try to find various ways to keep him from winning the race to be the Supreme Mugwump as Head of the International Confederation of Wizards.

The movie received some backlash for its recasting of Grindelwald after Johnny Depp lost his libel case relating to abuse allegations made by his ex-wife Amber Heard. The producers and Mikkelsen failed to acknowledge the gap between the two Grindelwalds and chose to take Mikkelsen’s version in a completely new direction in the middle of the series. Gone were the white hair and pale complexion. Instead Grindelwald just looks like your average Joe. They did manage to keep his heterochromia (different colored eyes) eyes, but used different colors which made it unnoticeable.

Secrets of Dumbledore also explores Dumbledore and Grindelwald’s relationship. The two are referred to as “lovers” but unless the viewer knows that Rowling had announced Dumbledore as gay in a press conference back in 2007, they would be extremely confused as it isn’t even mentioned in the original seven books. While representation is a rare thing in the media, and it is great that members of the LGBTQ+ community are finally gaining it in such a large franchise, they could have done a better job to make it more clear.

Since the franchise is called “Fantastic Beasts” it is only fitting that the film expanded on the different magical creatures other than the ones that had already been introduced to viewers. The Qilins, magical creatures who can see into a person’s soul to determine if they’re pure or not, and the Snallygaster, also known as the Loch Ness Monster, are just some of the new creatures that were introduced. The film was also the first thematic appearance of Blast-Ended Screwts who were first mentioned in “Harry Potter and the Goblet of Fire.”

“Fantastic Beasts: The Secrets of Dumbledore” did manage to do better than its predecessor by earning a 6.5/10 from IMDb and a 61% from RottenTomatoes.

Despites its downfalls, “The Secrets of Dumbledore” still managed to transport its viewers back into the Wizarding World once again.