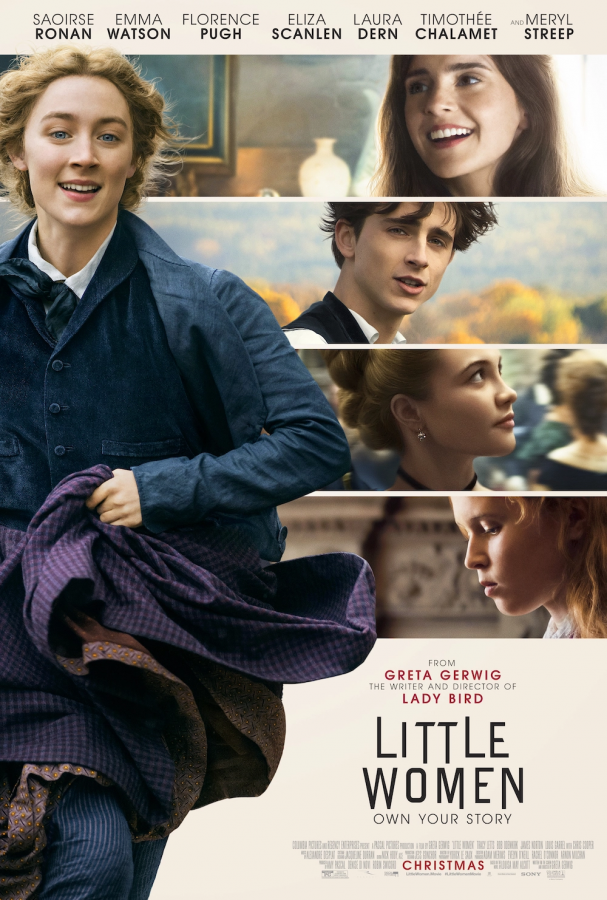 In 1868, Louisa May Alcott wrote the book Little Women. Since then, the book has become a classic. Every year young girls read the book and fall in love with the story of the March girls. Recently, director Greta Gerwing made a movie about this beloved story.

In the years following the Civil War, the four March girls went on to live out their own lives. Jo March, played by Saoirse Ronan (Mary Queen of Scots), moves to New York to become a writer and Amy, played by Florence Pugh (Midsomer War), moves to Paris to study painting. The oldest sister Meg, played by Emma Watson (Harry Potter), stays at home in Concord, Massachusetts where she marries a schoolteacher. The youngest sister Beth, played by Eliza Scanlen (The Devil All the Time), stays at home and develops a deadly sickness, which brings everyone back home.

The late 1800’s had a very distinct fashion and social structure. The movie portrayed this very well through the dresses the girls wore and the events they attended. In one scene, Meg is attending a Debutante Ball and all the other young women with her have large elaborate dresses that represent that time period.

An important thing for movies is how they portray the mood of the scene. Different colors in the background can reflect the way the characters are feeling or the mood of the story. For example, a darker hue might symbolize the sadness or the urgentness of the situation, while yellow can mean that everyone is having a good time. Throughout the movie, the timeline would go back and forwards in time. It was very helpful when the different colors were used as it made it easier to tell the time during which it was taking place.

The performances were very realistic, the raw emotion in some of the scenes was just overwhelming. The movie was very well done, although it was very dramatic. There were some parts that were more comedic however they mostly relied on the romantic or sad parts in the movie.

Even though there have been multiple retellings of “Little Women,” some critics have said that the 2019 adaptation is the best one yet. The film received a high score of 95 percent from Rotten Tomatoes, while the modern retelling made in 2018 only received 27 percent.

The movie went beyond expectations in following the plotline of the books. Even though the movie jumped around on the timeline it was easy to follow through the story of the March girls.