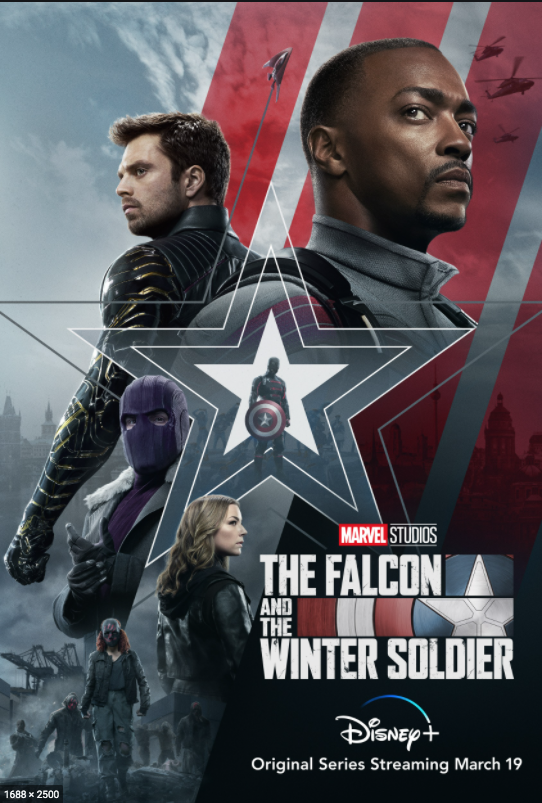 Ever since the end of “Endgame,” Marvel fans have been wondering who the next Captain America will be. Fortunately, we didn’t have to wait too long as “The Falcon and the Winter Soldier” was released on Disney+ March 19.

After Captain America, Steve Rogers (Chris Evans), goes back in time at the end of “Endgame,” he leaves the shield with Sam Wilson (Anthony Mackie). Who then donates it to a museum. Meanwhile, James “Bucky” Buchanan Barnes (Sebastian Stan) is dealing with the psychological aftermath of being turned into an assassin against his will.

Everything goes downhill when John Walker (Wyatt Russel), former Captain of the U.S. Army’s 75th Rangers Regiment, is named the new Captain America. Wilson and Barnes are forced to work with Walker in order to battle a rebel group called the Flag Smashers whose leaders are a group of super soldiers.

Throughout the series, Barnes and Wilson must come to terms with many different things. The first is that they will never see Rogers again. They portray this by making it so at first they have lots of hatred against Walker but eventually are able to work together with him.

Another, is when Barnes is trying to make amends with all the destruction he caused as the Winter Soldier so he befriends Yori Nakajima (Ken Takemoto), the father of a young man he killed. The show portrays how he struggles with telling him what happened and ultimately decides that everyone needs closure.

Another heavy topic they talked about was racism. Barnes introduces Wilson to a man named Isaiah Bradley (Carl Lumbly) who was made to be a super soldier by the U.S. government. Bradley talks about how they gave him supersoldier serum against his will and then put him in a lab and tested him for 30 years. Through Bradley’s story we see how they treated him and the other black super soldiers versus Rogers. Bradley tells Wilson that no self respecting black man would ever take up the Stars and Stripes. However, when Wilson eventually does claim the title he talks about how he knows people will hate him for taking it up yet, he’s still there with no powers but the belief that the world can do better.

One of things that made it so amazing was the use of the “found family” trope. Barnes has lost all his friends from his life before being the Winter Soldier but he finds a family with Wilson and his sister. It made me as a watcher just fill up with warm fuzzies.

Ever since “The Falcon and Winter Soldier” was first announced, fans and critics have been patiently waiting to watch it. The show was an instant hit and was even able to bring awareness to the other side of being a superhero. The show scored high ratings with IMDb (7.5/10) and Rotten Tomatoes (87 percent). Marvel and Disney did a phenomenal job with “The Falcon and The Winter Soldier” and I can’t wait to see how these characters develop in the Marvel storylines.